Made from eco-friendly materials, this four-season chino is both soft and comfortable and our answer to perfectly balanced smart casual trousers.

The chino; from military uniform to everyday trousers

The chino was originally designed for the soldiers of the British colonial troops in India and Pakistan. Not used to the high temperatures, they needed lightweight trousers to keep comfortable. In addition, these trousers also had to behard-wearing. Initially, chinos were sand/dust coloured to make the soldiers camouflage easier. The Americans adopted the chino during the Second World War. At the end of the war, a law was passed giving multiple advantages to GIs in the American army, such as a reduction in their school fees. This is how chinos made their appearance in American universities and how they became a fashion must-have.

Chinos; a must-have for the men's wardrobe

Chinos have been a staple piece of men's wardrobes for some time now. Everyone has a pair of chinos in their closet and if not, it's about time. Chinos are super easy to wear, go with (almost) everything and (in the right cut) look good on everyone. Did you know that it was Levis who helped launch the chino by creating Dockers (the first brand dedicated to the chino) and by imagining the concept of the casual friday. Which makes sense, considering that chinos are the perfect blend of smart and casual.

One piece for multiple looks

How to wear chinos? What shirts go with chinos? Can you wear chinos to the office? Chinos are one of the few pieces of clothing that always work. More casual than a suit, more elegant than jeans, chinos really suit any look: Show up at the team meeting with chinos, a classic shirt and a jacket. Pair them with a modern stand-up collar shirt and boat shoes for your best friend's wedding. Throw on a T-shirt and sneakers for Sunday brunch, playground hangs or shopping trips.

Learn more about chinos in our chino guide (coming soon). 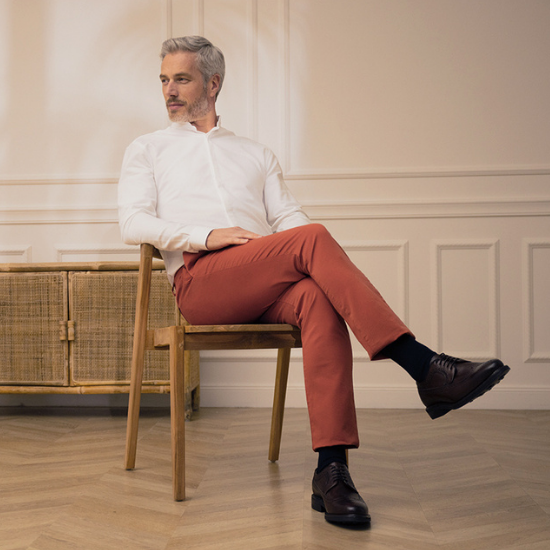