The pocket square has existed since ancient times : it was at first just a simple handkerchief, generally made of white linen, used by the Greeks and Egyptians. It was then found in France during the 14th century; nobles would put perfume on their handkerchiefs to mask strong odours. By the 18th century, the handkerchief had become popular all across western Europe.

Today it is worn in the left vest pocket but initially it was placed in the pants pocket, as it was used mainly for hygienic purposes. It wasn’t until the 19th century, with the arrival of the two-piece suit, that the pocket square was kept in the vest pocket to keep it clean. Finally, at the beginning of the 20th century, the pocket square became a men’s fashion accessory around the same time as the bow tie.

After a brief decline during the 1970s, the pocket square is back in style, thanks to modern men’s fashion. It’s now not just an accessory for special occasions and doesn’t even need to be worn with a tie or bow tie: it is an accessory that can be used without anything else.

There are now all kinds of different pocket squares: cotton, wool, silk or linen, with plain or varied patterns. They are used to subtly complement a suit by giving it contrast.

If you have a light coloured suit, choose a dark or coloured pocket square. Or with a dark suit, you would wear a light pocket square. Don’t be afraid to play with different materials. For example, with a tweed or velour vest, go for a silk pocket square that will bring contrast and lightness to your look.

When you are wearing a tie, don’t match it with your pocket square. This rule will break up the attention focused on your tie and will add a little freshness or spice to your outfit.

Discover the wide range of pocket squares from The Nines to add personality and uniqueness to your style! It’s not enough to just own a pocket square, you have to know how to fold it ! 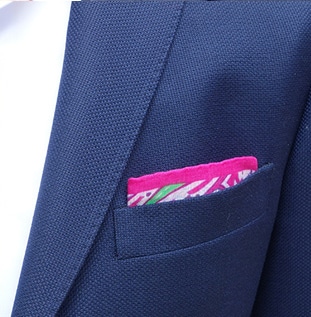 Cotton, wool or linen pocket squares are perfect for this type of fold because the material holds perfectly. There are variations of this fold, for example, shifting the back a bit to bring a little playfulness to your look and making it appear a bit less rigid.

1 - Flatten your pocket square, be sure to get rid of any wrinkles to ensure a flawless look.

3 - Fold the green part up but leave a small strip showing.

4 - Finally, place your pocket square into your vest pocket. For a perfect look, the pocket square should fill up the entire pocket to keep it from shifting down into the bottom of your pocket. 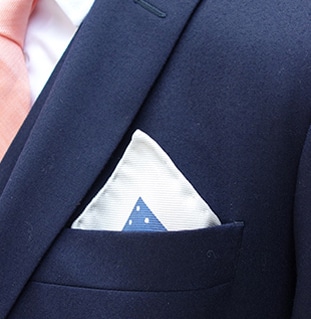 Very chic yet easy to do, this fold will give you an elegant look. One rule to follow, the pocket square should sit parallel to the lapel.

1 - Place your pocket square in front of you folded so that it forms a diamond.

2 - Fold the left tip towards the middle and then do the same with the right tip.

3 - Then bring the bottom into the centre fold.

4 - Place your pocket square inside your vest pocket. Move it up or down to adjust the height of the tip. 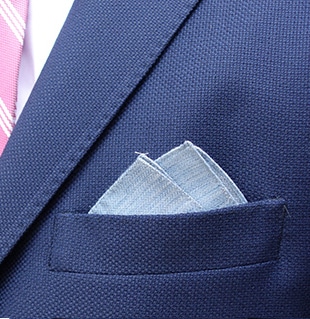 A bit less formal yet still stylish. It’s not hard to do but it is a little more complicated than the original fold.

1 - Position your pocket square like you would for the pointed fold, in a diamond.

2 - Fold the bottom side of the diamond up to form a triangle, but place it slightly below the upper edge.

3 - Refold the left point towards the center, then do the same with the right side.

4 - Place the pocket square into your vest pocket. 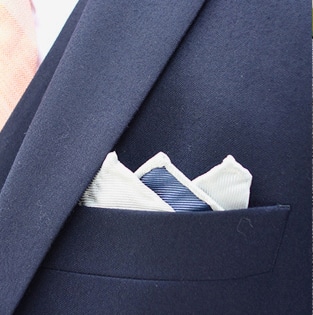 This is a more elaborate fold that will bring the finishing touch to your outfit. For this fold, the pocket square can pass over the top of the lapel.

1 - Just like the two pointed fold, place the pocket square with the tip facing up.

2 - Fold the bottom half up to the side of the upper tip. That way you get the second point.

3 - Bring the right point to the second one, still keeping it to the side in order to form the third point.

4 - Fold the remaining edge to the middle.

5 - Place the pocket square into your vest pocket. 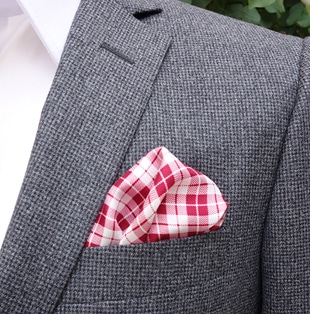 This fold is done mainly with silk pocket squares. In fact, it’s really the only material that allows this fold to have a natural look. You could also use a linen pocket square, provided that it is not too thick.

1 - Flatten out your pocket square and then pinch the center of it.

3 - With your other hand, grab the top of the fabric.

4 - Refold the bottom part in towards the centre.

5 -Place the pocket square into your vest pocket. 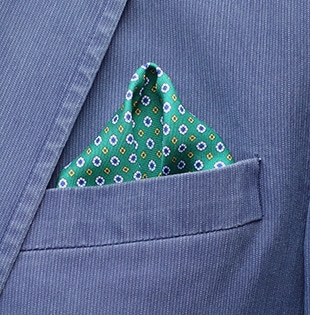 It’s a mix between the pointed fold and the puff fold that gives a natural and stylish look. It can be done with a silk or cotton pocket square.

1 - Place your pocket square in front of you folded in a square so that it forms a diamond.

2 - Refold the upper part down towards the bottom to make a triangle.

3 - Fold the right point in towards the lower tip.

4 - Repeat this step with the left point.

5 - Turn it over into a diamond shape again.

6 - Refold the left and right points towards the centre.

7 - Bring the lower tip up towards the middle.

Gentlemen, a silk pocket square is a must-have for every wardrobe. Use plain pocket squares or ones with patterns, borders or even coloured hems and reversible sleeves that will offer many possibilities for different folds.