The long-sleeved polo shirt made of 100% organic cotton is the must-have for mid-season. Because it keeps the perfect balance between the elegance of a shirt and the comfort of a T-shirt.

The long-sleeved polo shirt, it stands on its own

The origin of polo shirts

If historians are to be believed, the polo shirt was invented in India over 2500 years ago. The term "polo", of course, refers to the equestrian sport of the same name. In the 19th century, Joseph Sherer (a lieutenant attached to the Bengal Army) discovered the sport and decided to introduce it to the British Empire. At that time, polo players wore long-sleeved shirts made of rather thick cotton. However, the problem with the players' uniforms was mainly the shirt collar, as the fabric the collar tips hit the players' faces due to the wind and movement during play. To counteract this, the collar was simply attached to the shirt fabric with two buttons. Thus was born the button-down collar, but that's a story in itself.

Does the original polo shirt come from France?

The original polo shirt as we know it today didn't appear until 1920. Tennis star Jean René Lacoste rebelled against the thick, long-sleeved shirts that tennis players had to wear at the time. And decided to design a short-sleeved shirt with a shortened button placket. Lacoste also used an airy, lightweight piqué fabric instead of the thick cotton fabric. Since then, Lacoste polo shirts have been available with typical crocodile trademark. Today, many other brands have also made a name for themselves with the sporty shirt and the polo shirt is now available in countless different designs, from classic and monochrome to modern and colorful.

How to wear a polo shirt?

Polo shirts are chic and sporty and go with any outfit, making them a great alternative to a shirt. Thick enough to be worn alone with jeans or chinos, the long-sleeve polo shirt also fits well under a sweater, making the look more elegant with its collar sticking out. Whether it's for a smart-casual office look, an evening out with friends or a weekend family outing, the polo shirt is clearly one of those pieces you can combine endlessly. 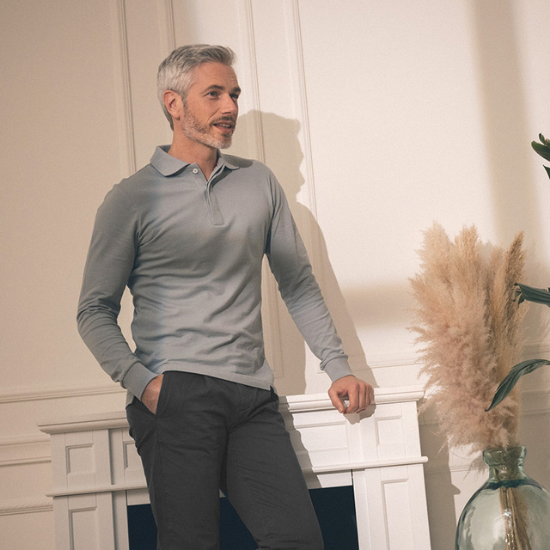